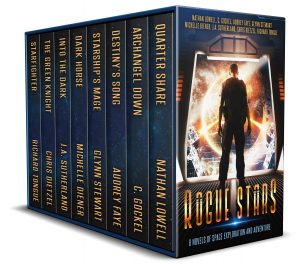 I wanted to put together a 99¢ Kindle Unlimited box set for my readers–one with the type of books I want to read: adventurous sci-fi with believable characters. My fellow writer Audrey Faye was of the same mindset, so we worked to put together a 8 novels, bought a gorgeous cover, booked promos … and Amazon decided that they will no longer allow Kindle Unlimited box sets unless the books are all by the same author or all unique to the set.

I wish I could deliver these 8 fantastic novels to you for 99-cents as planned. I can’t, but I can point you to the books. All are available in Kindle Unlimited, so if you belong to that program you can read them FREE. (If you don’t have a Kindle you can download a Free Kindle App.)

Ishmael Wang needs a job. The one he gets takes him to the stars.

Commander Noa Sato doesn’t believe in aliens. Fortunately, they believe in her.

Lakisha Drinkwater is the best Singer in the quadrant. Which means the last thing she was expecting is her latest assignment…

A Jump Mage, one of the order that binds humanity’s interstellar colonies together, makes a desperate choice…only to wind up with allies even more desperate than he is.

Rose may have been forced to leave her old life behind, but she’s found an extremely powerful ally–now she just has to survive him.

Into the Dark ~ Alexis Carew Book 1

All Alexis Carew wanted was a life of purpose and duty. She found it.

Two grisly acts, occurring in different parts of the galaxy, both lead to the same spot: a planet that will soon fall under attack. What unfolds is the stuff of galactic legends.

Major Jack Conway. Once a crack fighter pilot, now the master of a broken-down free trader. And the only man who can prevent galactic armageddon.