Imprisoned on her home planet, accused of aiding an alien invasion, Noa witnesses the beginning of a genocide–however, the murderers are not aliens, but her own people. Launching a daring attempt to reach the Galactic Fleet, she makes an unlikely ally in stranded professor, James Sinclair.

But James is not all that he seems.

James is not the man he once was. He has technological augments that give him extraordinary abilities. His augments protect Noa and himself, but he has no memory of how he came to have them. Worse, the changes may be more than physical.

Noa’s mission and the answer to James’s mystery will put them at the center of a confrontation of galactic proportions.

A confrontation that challenges the boundaries between human and alien, man and machine.

A confrontation that might spell the doom of the entire human race. 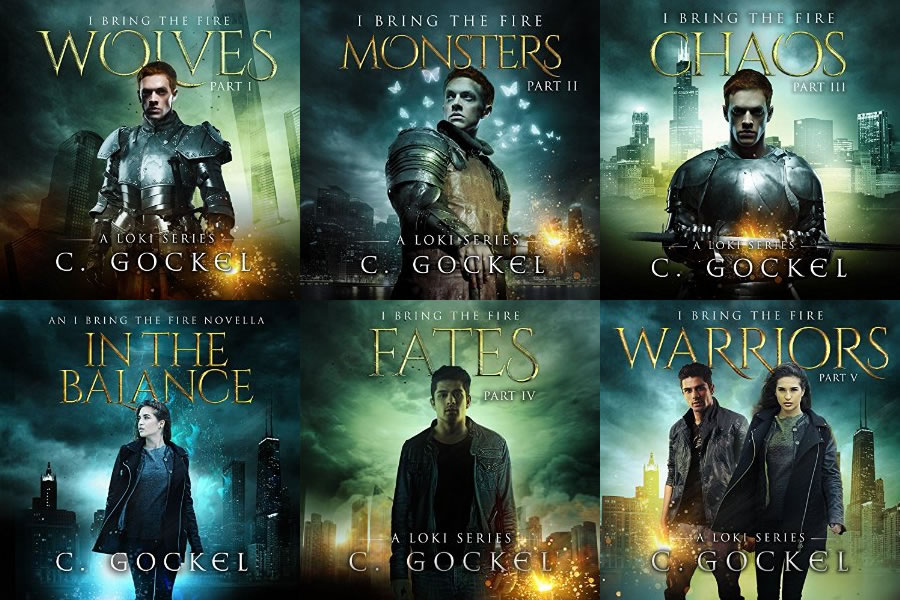 The I Bring the Fire series audio versions are complete! Start listening to the series in audio at Amazon US, United Kingdom, Canada, Germany, Australia

Kobo, GooglePlay, or borrow them from Scribd

The Alliance has toppled the tyrannical empire. It should be a time for celebration, but not for fighter pilot Captain Alisa Marchenko. After barely surviving a crash in the final battle for freedom, she’s stranded on a dustball of a planet, billions of miles from her young daughter. She has no money or resources, and there are no transports heading to Perun, her former home and the last imperial stronghold.

But she has a plan.

Steal a dilapidated and malfunctioning freighter from a junkyard full of lawless savages. Slightly suicidal, but she believes she can do it. Her plan, however, does not account for the elite cyborg soldier squatting in the freighter, intending to use it for his own purposes. As an imperial soldier, he has no love for Alliance pilots. In fact, he’s quite fond of killing them.

Alisa has more problems than she can count, but she can’t let cyborgs, savages, or ancient malfunctioning ships stand in her way. If she does, she’ll never see her daughter again.

Elle was just a normal teenager enjoying her summer vacation when everything changes. After an emergency planetwide ‘reset’ on her homeworld, she instead awakens on a spaceship and is told that the fate of known civilization is in her hands.

A mysterious Darkness has infected the interstellar crystalline network. The unique properties of the crystals allow reality to be ‘reset’ to past moments in time, granting second chances. However, the Darkness isn’t only threatening the reset process—it’s consuming entire planets.

Paired with a team of strangers, Elle embarks on an interstellar quest to protect the Hegemony by sealing the Master Archive, the backup for the crystalline network. With only vague clues to guide them, Elle and her new friends must track down ancient relics and unravel hidden secrets before their worlds and loved are lost in shadow forever.

Crystalline Space offers a fun blend of sci-fi and fantasy adventure with a sleek high-tech skin on traditional magic, perfect for fans of Final Fantasy, Kingdom Hearts, and Xenosaga. Begin reading the complete, award-finalist Dark Stars trilogy today and be transported to a universe where second chances are real!

★★★★★ “Words cannot describe how fantastic this trilogy is. Immortality is what it deserves.” – Amazon Reviewer

I can tell when you’re lying. Every. Single. Time.

I’m Jinx. As a private investigator, being a walking, talking lie detector is a useful skill – but let’s face it, it’s not normal. You’d think it would make my job way too easy, but even with my weird skills, I still haven’t been able to track down my parent’s killers.

When I’m hired to find a missing university student, I hope to find her propped up at a bar – yet my gut tells me there’s more to this case than a party girl gone wild. Firstly, she’s a bookish soul who’s as likely to go off the rails as Mother Theresa. Secondly, I’m not the only one on her trail; she’s also being tracked by the implacable and oh-so-sexy Inspector Stone.

Stone and I team up, and he shoves me into a realm where magic is real – a place where there are vampyrs and werewolves, dragons and trolls. And where my skills are more than just detecting lies…

Oh, and my dog? He’s a freaking hellhound who can manipulate the magical realms themselves.

I need to find the girl.

I need to discover who killed my parents.

A sword-wielding Cinderella. An enchanting Beauty. A villain who might not be so bad after all…

Once upon a time, before the Brothers Grimm, when fairytales were romantic fantasies for entertaining adults and frightening children…
Three twisted tales inspired by the classic fairytales…for adults who still love reading fairytales, though they’re a little darker now, making that happily ever after so much sweeter.

END_OF_DOCUMENT_TOKEN_TO_BE_REPLACED

When man and machine are one and the same, time moves differently. But it runs out all the same.
The Asterion Dominion government has fallen, its rulers slain–but in the Dominion, the dead rarely stay that way. A doomsday clock rushes headlong toward the day the monstrous alien shapeshifters known as the Rasu will demand their next tribute of lives. When denied it, the Rasu will burn every Dominion world to the ground.

Unless they can be stopped.

Nika, Dashiel and their allies fight to hold onto the reins of power even as they search for a way to defeat the enemy. Their quest will take them from barren deserts to a remote wilderness to the hidden homeworld of an ancient, mysterious species, all to uncover a secret 700,000 years in the keeping.

With everything they thought they knew now called into question and the reckoning at hand, the Asterions’ past, present and future will collide in a last daring gambit to save all three.

When man and machine are one and the same, death is no longer an inevitability. But in the darkest reaches of space, neither is life.
Diplomat. Rebel. Fugitive.
Nika Tescarav has lived many lives, though she no longer remembers most of them. Chased by agents of a regime that will do anything to protect the secrets of the Rasu Protocol, Nika flees to the stars with her once and future lover on a mission to expose those secrets. A race across alien worlds both exotic and deadly leads them to the bastion of the enemy, but its discovery brings a terrible revelation: sometimes the truth is indeed worse than the lies spun to conceal it.

With Nika and Dashiel on the run, NOIR steps up to defend against a virulent pathogen unleashed upon innocent civilians. When a desperate government moves to crush the resistance once and for all, unlikely alliances are forged between former adversaries and all paths converge in an explosive showdown that will change the future of the Asterion Dominion forever.