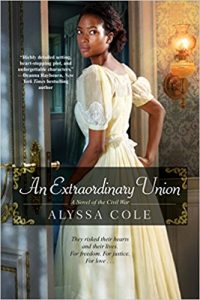 LOOKING FOR A BOOK TO READ? This weekend I read An Extraordinary Union, by Alyssa Cole. I started this book Saturday and just finished it–so you know, basically I inhaled it. It’s got everything: forbidden love, great historical detail, believable characters, and high stakes action.

The story takes place during the Civil War, and features two Union spies who fall in love while on assignment in Richmond, Virginia, capital of the Confederacy. (Dun-dun-dunnnnnn!)

Elle Burns is a freed black woman posing as a slave, and her love interest is a Scottish immigrant. Elle has helped others on the Underground Railroad her entire life, and she has a secret gift–an eidetic memory. Her motivations for risking her life for the Union are obvious, but they are well explored, without ever being boring. We get to see her uneasy relationship with abolitionists–some who still don’t view African Americans as being much more than animals. And we see her uneasy place as a well-educated woman in Civil War era society, and what that means for her romantic life. These aspects of her were complicated, and for that reason felt authentic to me. Her growing feelings for a white spy were also extremely conflicted, which I found very believable.

Also, what’s not to love about forbidden love?

Malcolm McCall, the white spy in question, is a Scottish immigrant whose family was forced to leave Scotland after their land was seized by the British. One of the strengths of this story was that it showed how that experience gave him empathy for the plight of enslaved African Americans. (It also made me want to read up more on that era of Scottish history.) It also showed how the experience of oppression changes from place to place, but how in some ways, it is eerily similar. It also gives the story a global context, which I liked.

Even though intellectually Malcolm knows that a long-term relationship with Elle will not be recognized by law, or by many people, he is much less conflicted about it. His outlook was naive, but felt real. I know a German family that lived for a time in South Africa under apartheid. They did not understand “the rules,” befriended black Africans, and made everyone uncomfortable on occasion–even, unintentionally, their black friends.

Side note: it was also charming how Elle reminded him of his Mum, personality-wise. I think we tend to look for “the familiar” when we fall in love. And Elle is familiar to Malcom in the most important way. She’s smart and knows her own mind (though not always her heart.)

The heat level in this book is high. There are fairly graphic sex scenes, but the scenes do offer character insights. If it’s not you’re thing though, this might not be the book for you.

I just bought the next book in the series … which I think is a pretty decent endorsement.

Get it at Amazon