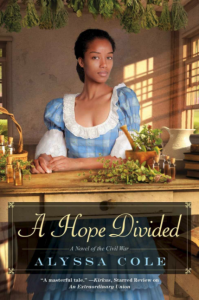 I picked up A Hope Divided with some trepidation. You know how you read a really good book, and after reading it you feel 1) Bereft 2) Certain that no other book can live up to your expectations. 3) You worry that the next book will be the same book with different names slapped on the previous characters. I was in that sort of post book high low after reading An Extraordinary Union.

A Hope Divided wasn’t An Extraordinary Union … it was better. It has all the things I loved about An Extraordinary Union: forbidden love, high stakes romance, history, and characters I really liked, but I think that I could identify with the characters a little more. An Extraordinary Union’s hero and heroine are based on real people, but they’re so blazingly heroic that in some ways it’s harder to identify with them. Hope’s Marlie and Ewan are more vulnerable; they are heroic in the story, but it is more because they have to be. They are both quiet individuals who’d probably be happier in a lab, but the war has forced them outside their comfort zones and they’re trying to make the best of it.

A little about the story: Marlie Lynch is half white and half black, a free black woman living with the very wealthy white half of her family in the Carolinas. She exists in a strange parallel world. She has the benefits of wealth and freedom, but the limitations of her race and sex. Her black mother was a “root woman,” and practitioner of “hoo-doo.” Marlie has turned the practical parts of her mother’s knowledge into a herbalist business.

I’m going to just say right here, that I was really impressed by how the author Alyssa Cole combined science and superstition in this book. She could have made magic real, or she could have dismissed it. Instead she walked a very narrow middle road and did a wonderful job showing how for Marlie’s slave ancestors, magic was really about trying to take control of their lives in a world that offered them few chances to do so. It also shows though, that some of their knowledge wasn’t just superstition.

Like a lot of romance novel series, the two male heroes are related. That may seem contrived to those unfamiliar with the genre–and indeed it is a little bit, but hey, it is a romance novel and I really liked Ewan. He isn’t like his brother at all, which is part of the reason this book is so good. He has a much more scientific mind, and he’s a joy to read. I’m not going to say too much more about that …

This book could be subtitled “Introverts in Love.” Alyssa Cole has captured the minds of two people who have very complex inner lives, and brings them out into the world. Danger runs high throughout the book. The romance is believable and incredibly sweet. (There are smexy scenes, so if those aren’t your cuppa, you might not like it. All of those scenes were well done and fit the characters, developed the story, and were more than just needing some nookie just because … )

Wonderful book. If you like historical romance definitely pick it up. It is traditionally published, and a little more expensive at $9.99 … but worth it. If you’re on a budget, it should be fairly easy to get your library to pick it up.