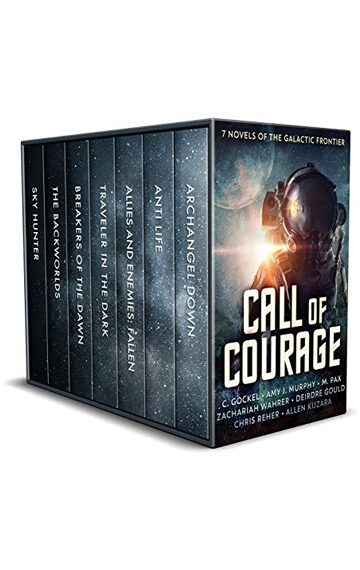 Heed the call. Download this collection of series starters today!

Archangel Down by C. Gockel
Commander Noa Sato doesn’t believe in aliens. She’s wrong. In the face of genocide she must hatch a daring plan with a ragtag crew to save the lives of millions–and her own. Every step of the way she is haunted by the final words of a secret transmission: The archangel is down.

Anti Life by Allen Kuzara
The opposite of life isn’t death; it’s something far worse. Mission colonel John Alvarez must carry out one last mission, a rescue attempt. Unknown to Alvarez, however, is the hidden threat that awaits him, one that–if he cannot stop it–will doom humanity to a fate worse than death.

Allies and Enemies: Fallen by Amy J. Murphy
Born into service of the Regime, Commander Sela Tyron is about as subtle as a hammer. To hammers, any problem can look like a nail. But things aren’t always that easy–especially when Sela is forced to choose between the only life she’s ever known and rescuing a trusted comrade.

Traveler in the Dark by Deirdre Gould
Sixteen centuries ago, they fled Earth. They’ve never walked on soil, felt rain, or breathed unrecycled air. At last, they sent exploratory mission to a new planet. It’s ideal… but they are not alone. Struggling for survival, they must make a choice. Sacrifice another species or accept their own extinction.

Breakers of the Dawn by Zachariah Wahrer
Humanity has fallen from its once majestic place amongst the stars. Desperate for resources, they seize every available planet, exterminating their alien inhabitants. Sent to subdue an uprising, a government operative unearths an alien relic. The strange device promises extraordinary power, but can he trust it?

The Backworlds by M. Pax
After the war with the Foreworlds, competition among the Backworlds is fierce. Pickings are scant enough that Craze’s father boots him off the planet. Cut off from everyone he knows with little knowledge of the worlds beyond, Craze must find a way to survive and get his revenge.

Sky Hunter by Chris Reher
Terrorists plot to destroy a space elevator on a remote planet. Nova Whiteside, Air Command pilot, is caught behind enemy lines in a bloody uprising. The treacherous and illicit schemes she uncovers there make her question who, really, is the enemy.