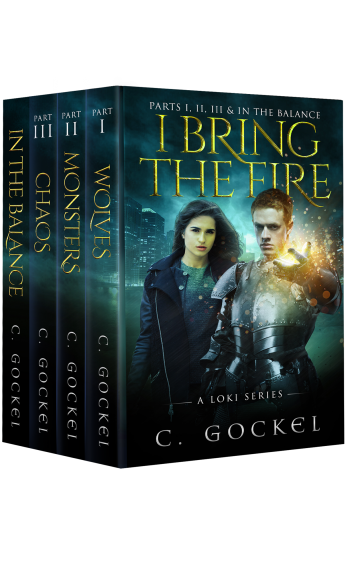 When Amy prays for a help, Loki the Norse God of Mischief and Chaos isn’t the savior she has in mind. Loki can’t resist Amy’s summons, but he can insist she help him outwit Odin, ruler of the Nine Realms. Can a nice midwestern girl trust a so-called God of Chaos? With an old evil calling to him from beneath Chicago’s streets can he even trust himself?

This box set is a USA TODAY bestseller, and contains the first three installments of I Bring the Fire plus In the Balance. It is perfect for fans of The Dresden Files and Terry Pratchett.

Wolves: I Bring the Fire Part I
In the middle of America, Amy Lewis is on her way to her grandma’s house. She’s being chased by a very bad wolf. Galaxies away Loki is waking up in a prison cell, strangely without a hangover, and with no idea what he’s done wrong — this time anyway. But he does know Thor is hiding something, Odin is up to something wicked, and there seems to be something he’s forgotten…

In this urban fantasy tale a nice midwestern girl and a jaded, mischievous Loki must join forces to outwit gods, elves, magic sniffing cats, and nosy neighbors. If Loki can remember exactly what he’s forgotten and Amy can convince him not to be too distracted by Earthly gadgets, Earthly pleasures, or three day benders, they just might pull it off…

Monsters: I Bring the Fire Part II
After being attacked by a serial killer, saved by Loki — so-called God of Mischief, Lies and Chaos — dragged to Alfheim, losing every cent in her bank account, and caring for her grandmother, Amy Lewis has lost her scholarship to veterinary school. But it’s alright. She has a plan. If she manages to keep her day job as a receptionist, and her night job as a vet tech, she may be able to get her scholarship reinstated and save enough money for the dreaded ‘miscellaneous fees.’

Too bad her day boss is unbearable…

Agent Steve Rogers has political aspirations, but when a suitcase nuke turns out to be something much worse and so-called Norse gods start showing up in his life, he has a priority shift.

Meanwhile, Loki’s priorities and plans haven’t changed at all. He wants Asgard to burn. Of course, earthly pleasures can be so distracting.

These three disparate characters have little in common, but they’ll have to join forces to save earth from trolls, wyrms, frost giant invasions, and an old evil growing beneath Chicago’s streets.

Chaos: I Bring the Fire Part III
In this final installment of the Cera story arc, the noose around Loki’s neck is tightening. Gerðr, the frost giantess, wants him dead; Cera, the World Seed, wants his head—literally and figuratively; the FBI wants him in Guantanamo; and an old friend from Asgard wants to bring him home…whether Loki likes it or not.

Things can’t get any worse, but when Loki’s involved, it’s certain they will. In the third chapter of I Bring the Fire, humanity’s demons are unleashed on the Nine Realms and Amy Lewis and Steve Rogers get front row seats.

In the Balance: An I Bring the Fire Novella
Chaos can never really be destroyed …

Loki, God of Chaos, gave Amy Lewis all his memories, and one request before he saved the universe. “Remember for me.”

Amy knows Loki will find her, one way or another … eventually. But as the weeks have ticked by she’s lost hope.

Called into the FBI headquarters to identify a magical artifact, she gets the opportunity to find Loki for herself. In doing so, she tips the scales of not one, but two universes, and has to choose for herself what form she wants Chaos to take.

The fate of the Nine Realms is in the balance, and this time it is in Amy’s hands.