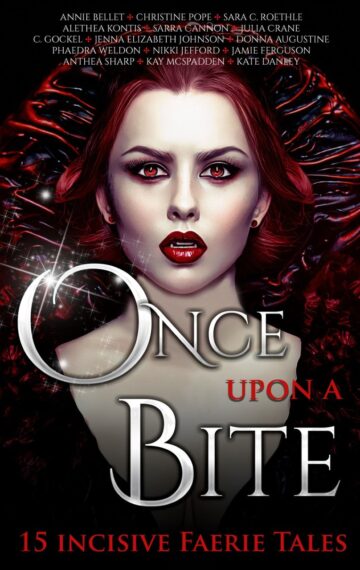 Fifteen tales tinged with darkness, where vampires and werewolves roam and familiar fairytales take on overtones of blood and vengeance.

Note: Some of these stories are not suitable for sensitive readers, but my story, Cat in Combat Boots, is just plain fun. In it, Beatrice, the intrepid grandma from I Bring the Fire finally gets her “man.” Yelf Reviews by Kay McSpadden is also very fun, but don’t drink tea while reading it! You’ll ruin your computer screen.

River Daughter – Annie Bellet
The tale of a woman who is the last in a long line of magical women, and the lengths a mother will go to not only to protect her child, but also her legacy.

The Girl Who Cried Vamp – Christine Pope
Hedgewitch Selena Marx is usually ready to believe six impossible things before breakfast. But even her credulity is strained when the new kid in town is full of strange stories, each one wilder than the next.

The Ugly Daughter – Donna Augustine
The Ugly Daughter follows a scarred and ridiculed girl named Winni. All she dreams of is a future where she’s accepted, but her true destiny is more than she could’ve imagined.

Princess of Salt – Anthea Sharp
A daughter is cast out, but can she win her way back to forgiveness through the simple art of cooking?

The Huntress – Sara C. Roethle
When an old woman is killed, a vampire hunter is sent to find the killer. Only she isn’t hunting vampires. No, the lone vampire around wants a lot more from her than blood.

Marusia and the Monster – Jamie Ferguson
Kara never stays too long in any one place, and never allows anyone to get too close to her. It’s just too risky—she never knows ahead of time what the monster inside of her might make her do. But Kara didn’t expect to fall in love…

Twisted Cinderella – Julia Crane
Cinderella has had it with being pushed around. Instead of taking the high road, Cinderella embraces the darkness in this twisted tale.

Faefrost – Jenna Elizabeth Johnson
When her best friend is taken by a woman the wild animals call the Frost Witch, Tegan of Eile will stop at nothing to get him back.

Blood and Water – Alethea Kontis
A faithful retelling of Hans Christian Andersen’s “The Little Mermaid,” only she’s a vampire. And there are pirates.

Breadcrumbs – Sarra Cannon
Despite trying to create a new life for herself after the disappearance of her brother, Gretel is pulled back into the dark world of vampire hunting when she catches sight of the man who first lured them into the woods as children.