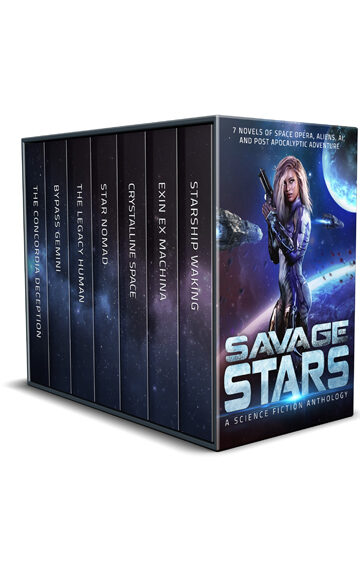 The universe can be savage, but these heroes won’t go down without a fight.

Seven full-length novels by bestselling authors that explore the far reaches of the universe, the limits of the human mind, and the divide between man and machine. Aliens, AI, and post-apocalyptic adventure–you’ll find them all among the Savage Stars.

Starship Waking by C. Gockel On an icy, barren world, a starship dreams of doom…Her nightmares will force an alien race to make contact with the most unlikely of heroes–6T9, a pleasure ‘bot struggling to find purpose, and Volka, a lonely mutant on a repressive homeworld. The galaxy will be shaken to its core. The starship is waking.

Exin Ex Machina by G. S. Jennsen When man and machine are one and the same, death is no longer an inevitability. Though Nika Tescarav has lived many lives, she no longer remembers them. But if whoever erased her past did so to silence her, they’ve failed. Enter a world of technological wonders, exotic alien life, captivating worlds–and a dark secret that will shatter it all.

Crystalline Space by A. K. DuBoff Elle and a team of companions with magically enhanced abilities embark on an interstellar quest to stop an alien invasion. If Elle and her friends can’t stop the Darkness corrupting the crystalline network connecting the planets, their worlds and loved ones will be lost in shadow forever.

Star Nomad by Lindsay Buroker The Alliance has toppled the tyrannical empire. It should be a time for celebration, but not for fighter pilot Captain Alisa Marchenko. After barely surviving a crash in the final battle for freedom, she’s stranded on a dustball of a planet, billions of miles from her young daughter. She has no money or resources, and there are no transports heading to Perun, her former home and the last imperial stronghold.

The Legacy Human by Susan Kaye Quinn What would you give to live forever? Elijah wants to become an ascender, a human/machine hybrid, but it’s forbidden for legacy humans like him. When he’s sponsored for the creative Olympics, he could win everything, including ascendance… or lose it all playing the ascenders’ Games.

Bypass Gemini by Joseph Lallo Lex was the next great hoversled pilot until a fixed race got him banned. Now a freelance delivery boy, life couldn’t get any worse. Then a mysterious suitcase got him mixed up with mobsters, a megacorp, and a mad scientist. Now he must solve the mystery or die trying.

The Concordia Deception by J. J. Green After spending 184 years in suspended animation, scientist Cariad begins a new life in a remote space colony. On a planet rife with intrigue, betrayal, and alien threats, can she fight to preserve humanity’s future in the stars?