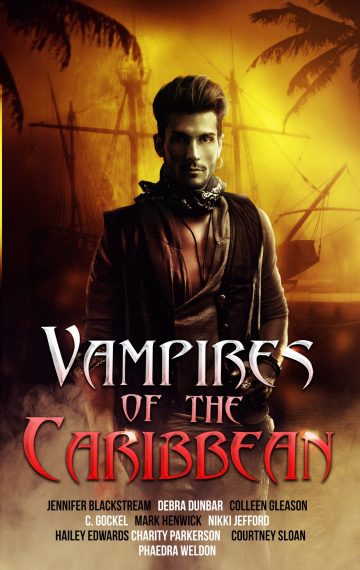 There’s no need to dig for treasure in this anthology of 10 short stories by today’s hottest fantasy authors. Stories include:

In Which An Undead Finds Himself At Sea (In More Ways Than One) A Story of the Draculia Vampires by Colleen Gleason – The year 1802: When sexy, undead Raine St. Albans goes off to the Caribbean on a mission to try and thwart the evil vampire Cezar Moldavi, he finds himself at the mercy of the female pirate captain Arial Bonny…in more ways than one.

A Vampire’s Life for Me by Nikki Jefford – Fane Donado’s always been a grab life by the teeth kind of vampire. When his alluring friend Cassie requests help investigating suspicious vamp deaths in the Caribbean Islands, Fane hops the first plane down. Playing Sherlock Holmes isn’t half as enticing as convincing Cassie to break her number one rule of not dating other vampires. But if it’s true that a vampire hunter’s trolling the islands, they’re all at risk.

Someday My Count Will Come by C. Gockel –Dare is an ancient Night Elf keeping secrets from his own kind and seeking a Night Elf that has gone renegade. Penny is only twenty-four, seeking her lost sister, and hiding a secret as well. To save themselves, and save Dare’s people, they might have to risk letting their secrets go.

No Scions for Old Men by Courtney Sloan – Vampire Queen Esme holds a treasure too tempting for any to pass up: a cure to the bestial madness born from vampiric long life. But when a group of South Americans seeking the cure crash onto the island, dragging an entire pirate fleet behind them, Esme must decide if a few refugee souls are worth the destruction of her people’s way of life.

Midnight Escape by Jennifer Blackstream– Where do vampires send their criminals? Paradise.

Out for Blood by Hailey Edwards – White sand beaches, fresh tropical drinks…and three exsanguinated bodies. So much for Marshal Ayer’s transfer to the island of St. Kitts being a vacation.

Enzili by Mark Henwick – Will Charles Tynes be able to face the true horror that lurks beneath the bright Caribbean sun?

Consume by Charity Parkerson – Jonathan thinks Cin is too perfect to be real. He’s right.

Dawn’s Justice by Phaedra Weldon – A message claiming Robert Guillot is not dead but alive in Havana, starts Solange on her own personal journey to learn the truth about what happened to her secret lover. But will she find him before his scheming sister and overly kind uncle do?

Ship of the Dead by Debra Dunbar – Adeyemi leads a band of rebel Maroons in the mountains of eighteenth-century Haiti, but one by one his men are found dead. Is the murderer an evil spirit? An animal? Or are the killings somehow related to the eight strangers that arrived from France on a ship where nearly all of the crew are dead?