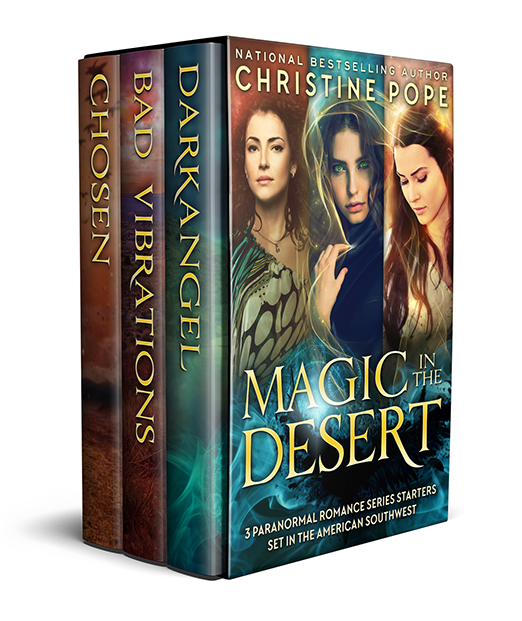 Author Christine Pope has boxed up the beginnings of her bestselling series in one compilation. Christine loves to blend magic with science, romance, and mythology. DarkAngel is the start of her bestselling Witches of Cleopatra Hill series, and Bad Vibrations is a fun blend of aliens and enchantment. My I Bring the Fire fans have especially loved Chosen, the book that begins her Djinn War series; it’s based on Arabian myths of what djinn are and their relationship to humans and each other. This set is free for now, on all vendors. So check it out!

Finding the man of your dreams can be a real nightmare….

As the future prima, or head witch of her clan, Angela McAllister is expected to bond with her consort during her twenty-first year, thus ensuring that she will come into her full powers at the appointed time. The clock is ticking down, and her consort has yet to make an appearance. Instead, her dreams are haunted by a man she’s never seen, the one she believes must be her intended match.

But with time running out, and dark forces attempting to seize her powers for their own, Angela is faced with a terrible choice: give up her dreams of the man she may never meet and take the safer path, or risk leaving her clan and everyone in it at the mercy of those who seek their ruin.

She thought she could see it all…
He showed her so much more.

Psychic Persephone O’Brien thinks she’s always prepared for the unexpected, but when she reaches out to distractingly attractive ufologist Paul Oliver for help, the two of them soon find themselves drawn into a far-reaching conspiracy that sends them on the run — as well as into each other’s arms. And after Paul is captured by sinister agents, Persephone must join forces with an unlikely group of UFO hunters to rescue Paul and derail an alien plot before it’s too late.

When a fatal fever nearly wipes out the entire world’s population, the survivors of what became known as “the Dying” believe the worst is in the past. Little do they know….

In the aftermath of the Dying, survivor Jessica Monroe searches for sanctuary in a world unlike any she’s ever known before. As fear and isolation envelop her, Jessica encounters the sensitive and helpful Jace, who she believes is another survivor. But Jace has a past and secrets of his own that’s he not ready to disclose. Soon she realizes that the destruction of humanity might actually be the first step in a larger, more complicated plan — a plan that may very well involve her. Struggling to discover her role in a terrifying new world where everything has changed, Jessica must decide who she can trust. But is the price for that trust just too high?