The final chapter in the Archangel Project Series is available NOW at Amazon US, United Kingdom, Canada, Germany, Australia

Beyond the borders of known space a Dark Fleet is gathering…

Volka, 6T9, Carl Sagan, and their band of sentient faster-than-light ships are charged with finding the Dark’s forces. But the enemy is closer than any realize, and the Dark’s next strike will be sooner than they think.

New to the series? The first book is FREE at most vendors.

Shameless self promotion: Paperback books are easy to wrap!

They come in a multitude of varieties–including all of the novels in the I Bring the Fire and Archangel Project series. So what are you waiting for? Get some of your holiday shopping done early!

I’ve put together a box set with selections from I Bring the Fire and Archangel Project with the express intention of making it free.

I also included Let There Be Light because I think John must find Hana, and I will probably tie that into the Archangel Universe at a later date.

Please don’t buy it–I mean, you can if you want, and I would gladly take it as a tip–but I will be setting it to free hopefully by August.

More than anything though, I’d really like reviews on this one. If it goes free with some nice reviews it will get more downloads. More downloads hopefully will mean I’m reached by new readers. New readers will hopefully buy more books.

If you do want to purchase or, (please with sugar on top) leave a review, just click the button below for links to all vendors:

In the year 2432, humans think they are alone in the universe. They’re wrong.

Commander Noa Sato plans a peaceful leave on her home planet Luddeccea … but winds up interrogated and imprisoned for her involvement in the Archangel Project. A project she knows nothing about.

Professor James Sinclair wakes in the snow, not remembering the past twenty four hours, or knowing why he is being pursued. The only thing he knows is that he has to find Commander Sato, a woman he’s never met.

A military officer from the colonies and a civilian from Old Earth, they couldn’t have less in common. But they have to work together to save the lives of millions—and their own.
Every step of the way they are haunted by the final words of a secret transmission:

The archangel is down.

What the Reviewers are saying:

“ARCHANGEL DOWN is a compelling sci-fi complete with satisfyingly high-tech gadgetry and high stakes political and social intrigue … subtle humor pervades the book, often in the form of Noa and James’s banter, and the vivid action sequences provide suspense and adventure. “ -IndieReader

“This is a terrific science fiction selection that explores our human emotion.  Anger, fear, self-doubt, love,  and humor are on display as the colonists of a new world are forced to realize they are not alone in the universe.” –Great Digital Books, “7 Great Books for Star Trek Fans”

They walked down the same road on the edge of No Weere they’d taken the day before, but Volka was no longer animated and chatty. He almost wished she’d point out a reservoir of diphtheria, cholera, or typhus that she’d played in, just to end the silence. She began falling behind, and he looked over his shoulder, expecting to see her exhausted and flagging. Instead her eyes were bright, her ears were forward, and her body was bent low.

He stopped. “You’re stalking me.”

Three point three meters behind him, Volka straightened. “I was not.” The rain had soaked her through, and he could see every outline of her body. The chill, the rush of hormones or both was giving her “hardware malfunctions.” His core programming insisted he help with the issue. His Q-comm screamed it was a bad idea.

Volka’s ears flattened sideways. “I was stalking you,” she admitted. “I’m so sorry, Sixty.”

“Never appologize to a sex ‘bot for stalking them,” 6T9 said. He meant to be flip, but the words came out heavy and serious.

Her amber eyes met his. “But you’re more than a sex ‘bot.”

“Nebulas,” 6T9 whispered. It was a common enough exclamation, but nebulas filled 6T9’s ocular processors, and he didn’t see the steps he took to close the distance between them. 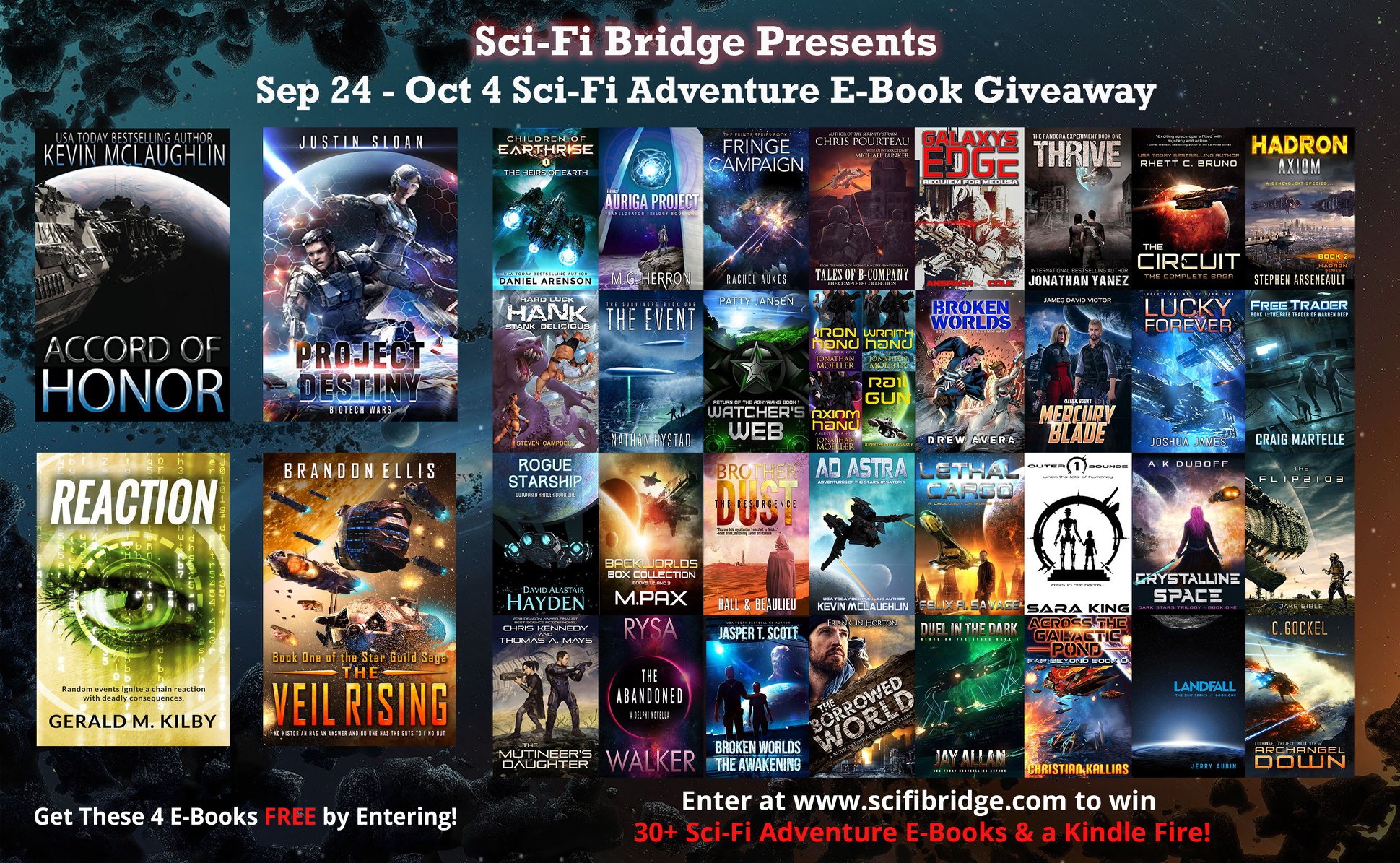 Sign up for a chance to win 30+ Sci-Fi Adventure! All who enter will receive 4 E-books completely FREE. Enter here: www.scifibridge.com