The final chapter in the Archangel Project Series.

Beyond the borders of known space a Dark Fleet is gathering. Volka, 6T9, Carl Sagan, and their band of sentient faster-than-light ships are charged with finding the Dark’s forces. But the enemy is closer than they realize, and the Dark’s next strike will be sooner than they think.

To protect the human race, 6T9 evolved with the flip of a switch and a few lines of code.

But he’s made himself a killer as well as a protector. The programming that may save humanity has driven him from Volka, the woman he loves. In the heart of the Dark’s first strike against the Republic, 6T9 must discover what he has become, who he wants to be, and who he wants to be with.

Slowly and almost unnoticed, Volka has been evolving, too. Heartbroken by 6T9’s departure, she is torn between love and duty. Accepting the latter, she takes a mission that will lead her to the edge of the universe. There, she will be tested, and her evolution will pass a point where there will be no turning back.

An android who has become more than a sex ‘bot, a mutant who has developed startling abilities, 6T9 and Volka have become more than human. The changes they’ve endured may save the galaxy, but have driven them further apart.

Will they find a way forward together, or will the bond between them be another casualty of the Dark?

1 credit through Audible. Not a member? Sign up and get one title free!

The Darkness will strike again.

The last time Carl, Volka, and 6T9 fought the Dark, 6T9 failed Volka. If he wants her and all the carbon-based life forms that he loves to survive, he needs to change. Change is as easy as flipping a switch for an android, but dealing with the consequences is not so simple.

In order to save Volka, he’ll have to give up a part of himself that Volka adores. He’ll need to become something an innocent, peace-loving sex ‘bot was never designed to be…something he despises.

To save Volka and the galaxy he’ll need to become Android General 1.

Carl Sagan’s Hunt for Intelligent Life is available for a free listen on AudFans. You have to sign up for an account, but it is free. 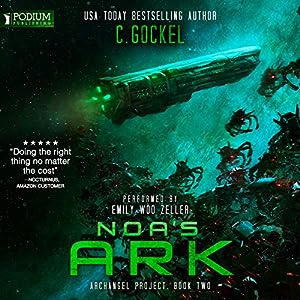 Podium has released Noa’s Ark in audio–and it is so hard for me to type this and not listen to it RIGHT NOW. I’ve lost so many productive writing hours listening to audiobooks. (But they do make me more productive when it comes to things like matching socks. There is a special level in Hell where you try to match socks who’ve lost their mates in the inter-dimensional sock stealing device, aka, dryer.)

I love to read, but if you have to spend a lot of time in a car, doing errands, etc. audiobooks are the way to go.

Noa’s Ark is only 1-credit at Audible. Or, if you own Noa’s Ark in Kindle format it’s only $2.99 to purchase it from Amazon. It’s also available at iBooks.